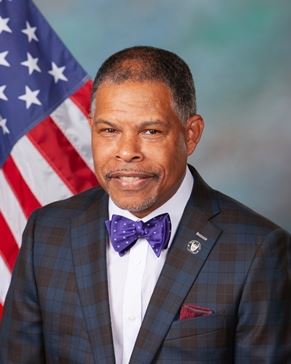 Councilmember Moore has been a resident of the City of DeSoto for over 30 years; his son and daughter attended schools in the DeSoto Independent School District.

Councilmember Moore was elected to the DeSoto City Council (Special Election) on August 26, 2017, to serve on Unexpired Term for Place 7.  Councilmember Moore is very active in the Real Estate community.  He is Chairman of the Government Affairs Committee and a member of the Finance and Budget Committee of MetroTex Association of Realtors.

Councilmember Moore is also very active in his community. When he is not assisting clients with their real estate needs, he and his mother participate in the delivery of Meals on Wheels in Southwest Dallas County.

Councilmember Moore previously served on the following boards: Dallas Chapter of the NAACP, Dallas Urban League, Past President of DeSoto ISD Education Foundation, the Dallas Black Chamber of Commerce and on the Advisory Board of the Visiting Nurses Association for Meals on Wheels and Hospice Care Giver (VNA).

He has received many civic and professional awards for his outstanding service and contribution to his community and his profession.
He lives by the motto “Give Your Life Away To Something More Important Than You.” It is an honor to serve the people of DeSoto.